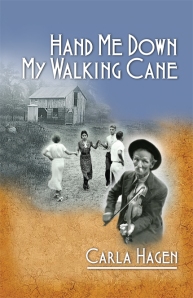 “With humor and compassion, Hagen has given us a novel well grounded in history, the result of diligent research. She has created a dazzling tale of life on the Minnesota border with Canada during the 1930’s Prohibition and peopled it with a compelling cast of characters, displaced by history and personal circumstances. Few writers equal Hagen in her ability to reproduce the harshness of the environment and the tenacity of a people struggling to survive. A riveting read and a delightful one.”

— Diana Anhalt, author of A Gathering of Fugitives: American Political Expatriates in Mexico 1948-1965

At the height of the Depression, Faunce Ridge, a tiny village on the Minnesota-Canadian border, is declared a rural slum by Roosevelt’s New Deal government. Hometown boy, Emil Rousseau, is sent to photograph the poverty of his childhood neighbors to sell Congress on resettlement. Told from the perspective of Emil, his childhood sweetheart Rose, madam Sadie and bootlegger Magnus, Hand Me Down My Walking Cane speaks to the mystical pull of this harsh and beautiful place while bringing to vivid life the history of the borderland.

Buy Hand Me Down my Walking Cane at your favorite bookstore or other fine retailers.

The Smells of All the Ports of Nostalgia, for Sing Heavenly Muse!, 1997

Memorial Day, for MindFire: War, Peace and Everything in Between

SMA Six Months After Your Death

A chapter from Mexico City Blues